Stop what you are doing. Find a piece of scrap paper and something to write with. An old receipt will do. Now go ahead and draw a mechanic. I will give you five minutes.  Do not scroll down until you are finished.

Did you draw a man in a hard hat? Maybe you drew a spanner, toolbox and a car. This is fine right?
If you did draw a male mechanic, you portrayed the common image of a those in STEM (Science, Technology, Engineering and Mechanics) careers as that of a bespectacled male, with unkempt hair in a white lab coat (Sherz and Oren 2006). Think Albert Einstein. 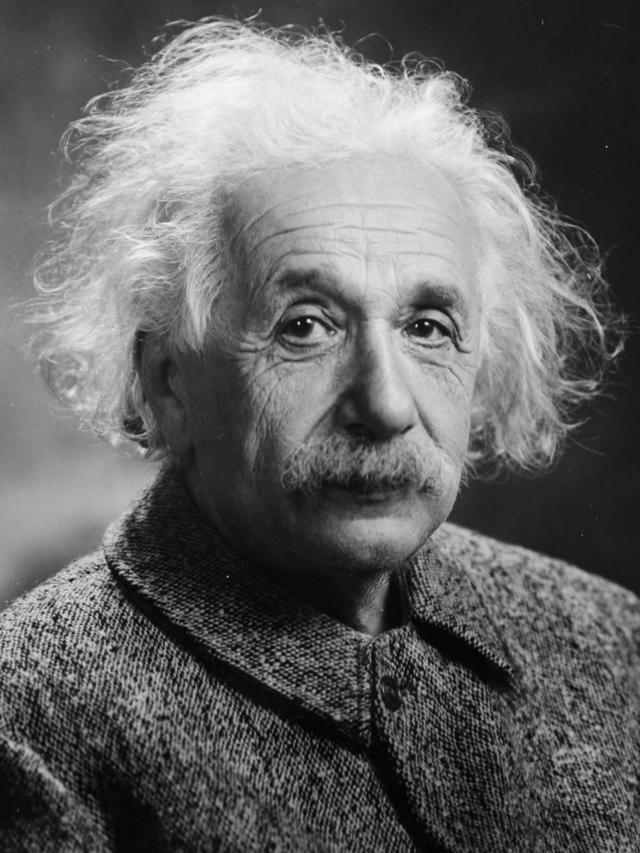 Perhaps you are much more forward thinking and drew a female mechanic, joining 28 students in Chambers (1983) study, were only 28 students out of the 4807 drawings represented female mechanics. All the 28 children were female themselves.

Gender science stereotypes of maths and science can influence young people and men’s aspirations to enrol in science, technology, engineering or mechanical subjects.

An article by the Guardian in March 2018 suggests it may be the cultural effects which are the cause of lower number of girls in STEM, one reason being social belonging. This is the feeling of relatedness and acceptance in a group. Teenagers were inclined to pick subjects which had greater gender representation of their own gender. It is stated by the article that people become drawn to things they are competent and avoid those which are not. Girls are influenced by the stereotype that they are not capable for studying STEM. There is the feeling of ‘people like me do not belong here’ (Walton and Cohen, 2007, p83)

Swale Supporting Girls (SSG), made a day trip to Sparshatt Truck and Van on 7th November 2019. SSG is one project which mission is to empower young women, widen their opportunities, lessen the barriers they face, improve well-being and social circles. The end goal is the creation of better quality of life for girls.
This day aimed to break the stereotype that girls cannot do well in STEM. The day allowed for the girls to discover the countless opportunities available on their doorstep, a fact unknown by many youths in the area.

SSG walked to the Sparshatt Truck and Van. This was a good life experience, as it was not realistic as young people new to jobs, to be expected to use car.
The new members of SSG were introduced to the staff members during the short walk. They were informed of the different workshops that were run by the charity including sewing group, walking club, and conversation club for beginners and improvers. They were told this was not the only aspect of the charity as there was wellbeing programmes, social care, training enhancement and more. As greetings were exchanging the local services and key buildings in Sittingbourne were pointed out. The girls really appreciated this personal tour of the town as they had not ventured far into the town centre.

It was known through the appearance of the Mercedes Benz logo in the distance that arrival would be soon. There were many cars in the locality with staff dotted around. The girls waited in the reception for the host to greet us.

Expectations of the appearance of a mechanical worker were shattered as we entered. The HR Advisor who kindly hosted us for the day was not wearing a hard hat and overalls. No, the elegant looking woman who introduced herself as Donna, was not the average picture of those working in mechanics. she had manicured nails, heels.

She took us to a conference room where there was an arrangement of sandwiches, crisps and drinks. She welcomed us to lunch first. The girls were hesitant in taking their places. But the SSG staff member was at hand to ease them and passed them the sandwiches. The staff member made sure to be in the background for moral support.

The staff introduced themselves and in turn the girls described their academic background and career hopes. One individual was certain they would work in the mechanical department in their future and were looking forward to seeing the presentation. Although some of the girls did not aspire to go into mechanical careers, they were reassured that they would find benefit in looking at working behaviours and networking with people passionate about what they do. They would be able to have a taster and try volunteering in different roles before coming to a decision of what they want in a career.

Donna began the presentation. Donna gave a brief introduction of Sparshatt Truck and Van. It is a Mercedes-Benz Trucks Dealer Network with a new location in Dartford. A founding member in 1974 of the Mercedes-Benz UK commercial vehicle network, the company operates from headquarters in Sittingbourne, and other branches in Ashford and Tonbridge.

Apprenticeship were open in the autumn. The application form could be found online. The process of the apprenticeship included various forms written and mentorships which helped in becoming a qualified mechanic. It was a 4-year programme. On the website it states (as of 29/11/2019) that the weekly wage is £175 with shifts covering Monday to Friday. The total number of working hours is 40.

The training involved being supported by a highly qualified Mercedes-Benz Technician. Apprentices would use the latest automotive technology and tools gaining the skills and knowledge needed to have a successful career as a Mercedes Benz Heavy Vehicle Technician.

At the end of three years there is a point assessment. And if you succeed there is an improver year which is a continuation to use skills and learning from in order to achieve Mercedes-Benz Maintenance level qualification.

You will need to demonstrate:

GCSEs at grade C/4 or equivalent in English and maths. Predicated grades are accepted but a job offer will be provisional dependent on grades.

Potential for continued employment on completion of the apprenticeship and training to progress to a Mercedes-Benz Maintenance Technician.

It is important for those applying be hard working, taking care to always arrive on time, have a good attitude, have impeccable personal presentation.

Mary who has now completed an apprenticeship gave an enlightening speech about how she was able to complete her apprenticeship in male dominated career. She said that there was much bravado, but the others were good colleagues to her and if she ever felt any comments made her uncomfortable, she made sure to communicate these and it was resolved quickly without it being an issue. The person was always very apologetic afterwards. Mary’s first-hand experience was a welcome addition to the presentation, she gave the girls a confidence and a much-needed real life aspect of the role, something which can not be taken from descriptions on a page. One of the attendees asked Mary during a quieter time if a driving licence was a requirement of the job. Mary stated it was not, as the vehicles came into the garage and others would be on hand if drivers were needed.

The young girl who had asked the question demonstrated an eagerness to endeavour into a career as a mechanic. She had previous experience in mechanical work in a garage and had knowledge on vehicle maintenance. However bad life choices and experiences had waylaid her path to success. It was commendable that the young person was determined to learn on the day. She is looking to apply for the 2021 intake year. SSG staff told her they would be on hand to assist her in her progress in the applications and work experience required in applying for the role.

Jackson a staff member of Sparshatt gave a tour of the premises. There were many familiar logos which could be seen on the vehicles, G4S, NHS and many others. Jackson showed the attendees a tool box worth £2,000. It had tools within, screwdrivers, spanners, and many others. When asked how they knew which of the tools were required for which fitting, Sparshatt replied it was trial and error, but with experience it could be done by eye. Jackson showed the visitors a huge engine which was put in place by hug slabs of rock, which were used to keep train in their place overnight. Jackson also showed an outside area, where there were lots of parked vehicles, Sparshatt had a very large site. They were shown the garage were the fixing of the vehicle was completed, the turnover time for vehicle coming in and out were very quick and was done within hours.

The day ended with thanks given to the hosts. Thank you, Sparshatt Truck and Van, for taking time out of your schedule and hosting Supporting Women and Girls. The girls found the experience educational and appreciated the effort taken. We hope we are invited to come again soon. Thank you for those in attendance of the day for taking the opportunity to learn about the mechanics.

If you are a young person interested in days out or work experience, please email or phone 01795 420455

If you are an organisation interested in hosting young people for a day to learn about your work place, then please do contest us on 01795 420455 Or email info@diversityhous.org.uk

Readers are very welcome to visit the office located near the Sittingbourne town centre.

Address: Diversity House, Phoenix House, Central Avenue, Sittingbourne, Kent, ME10 4BX. We are open Mon-Fri 9am-5pm. If notice given we can do outside these hours. 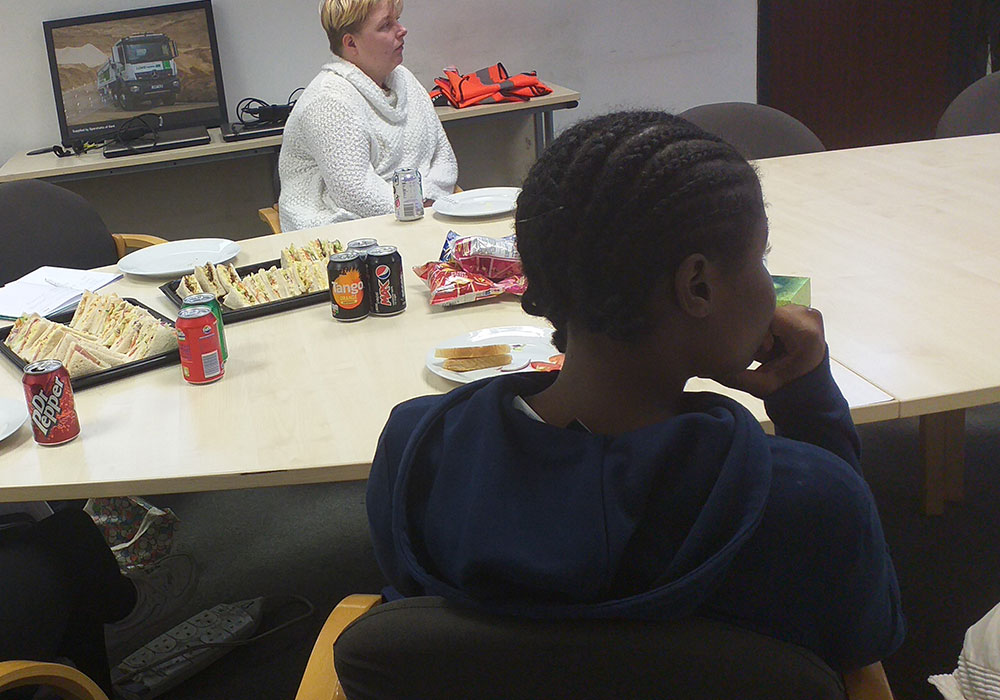 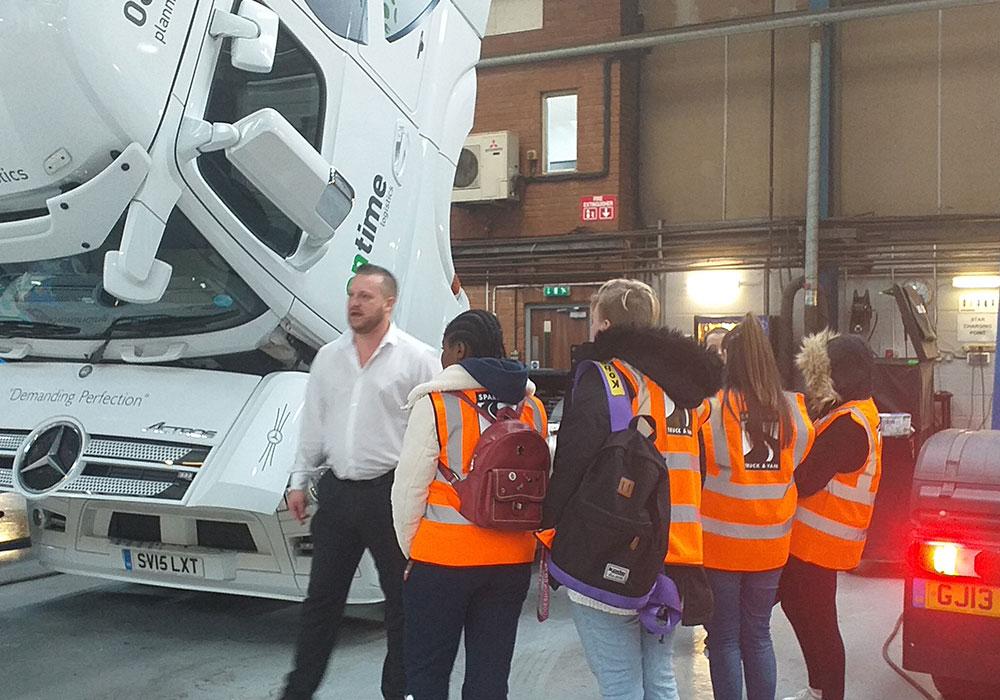 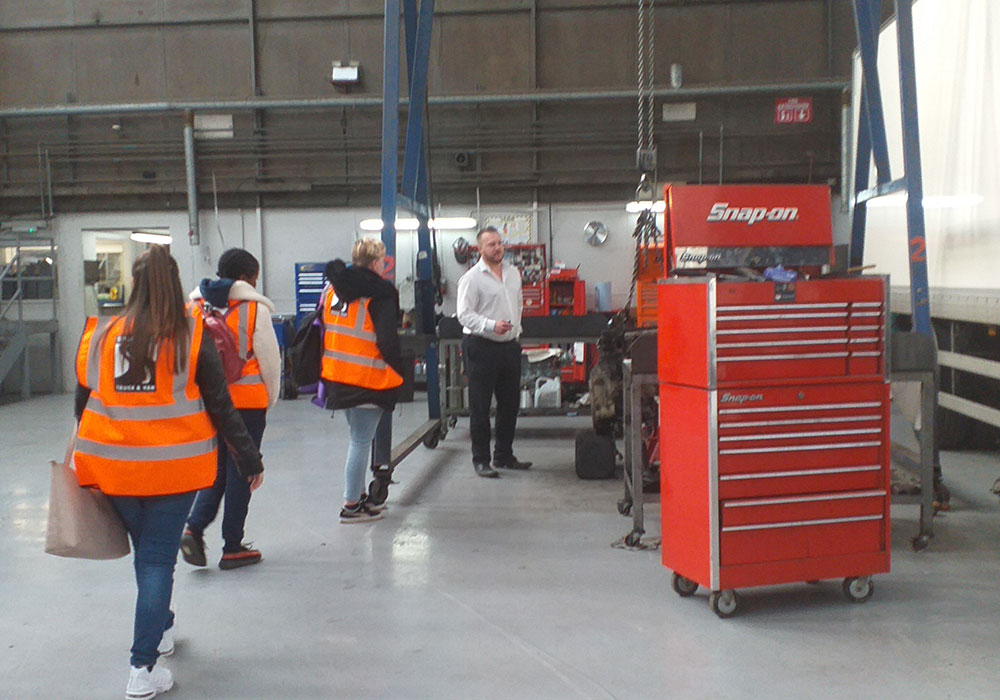 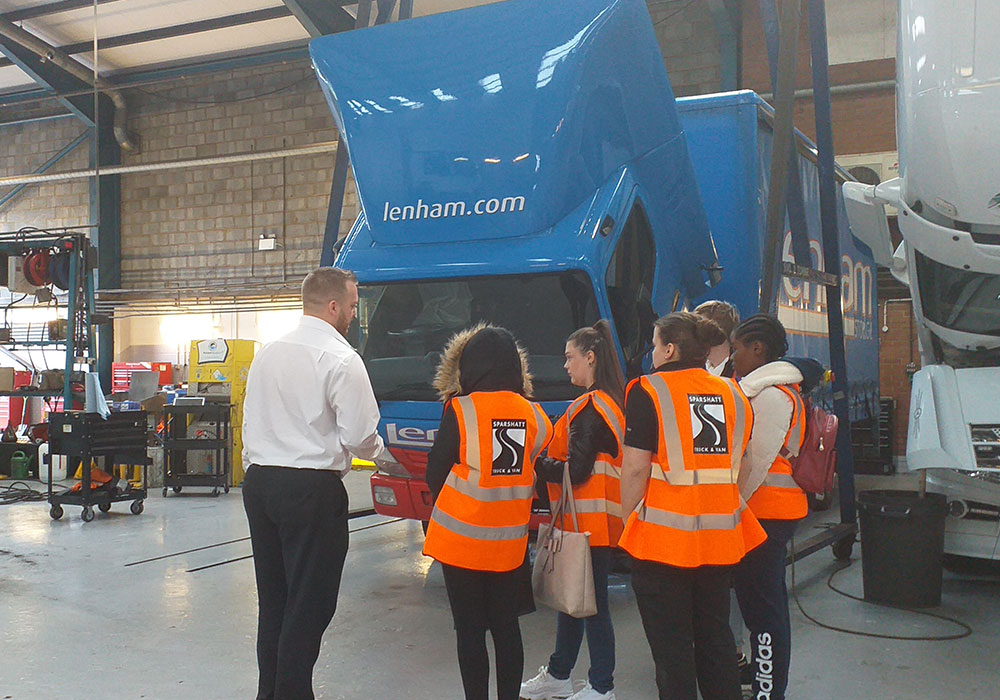 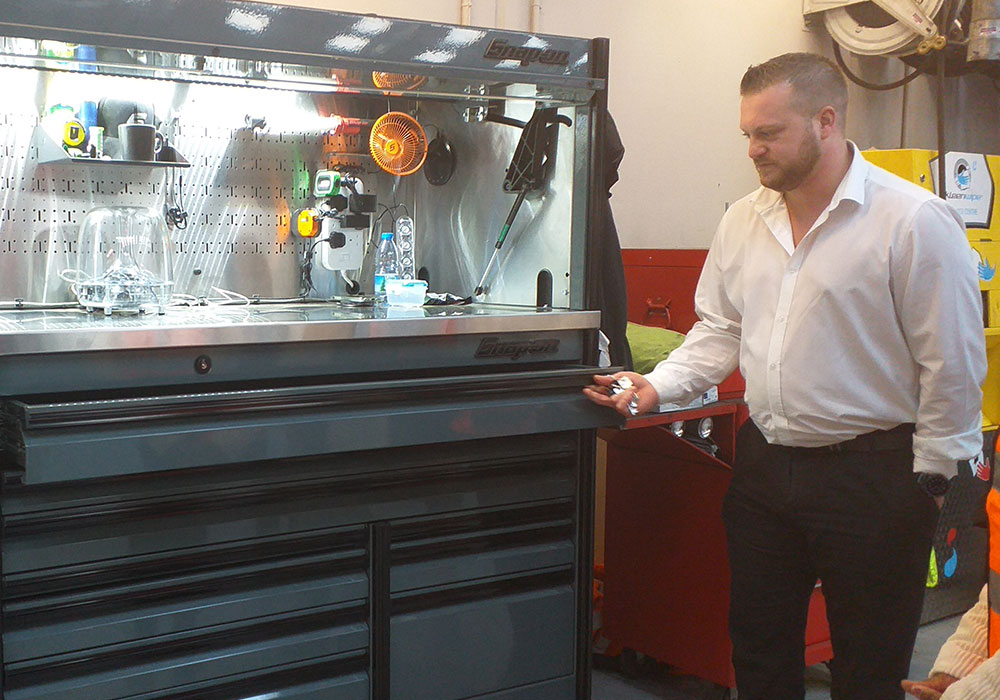 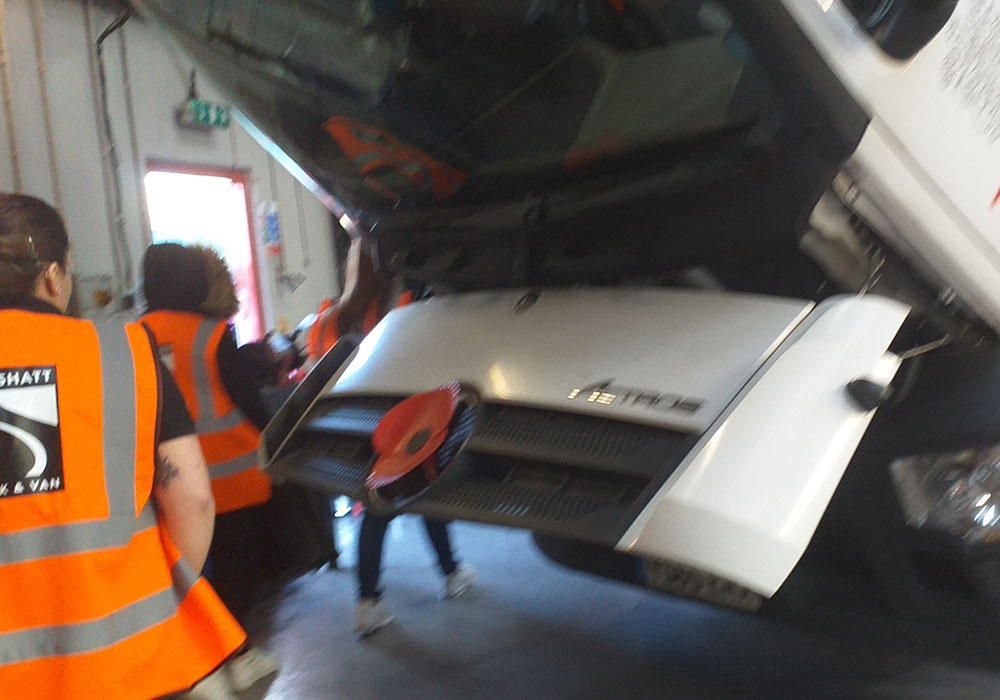 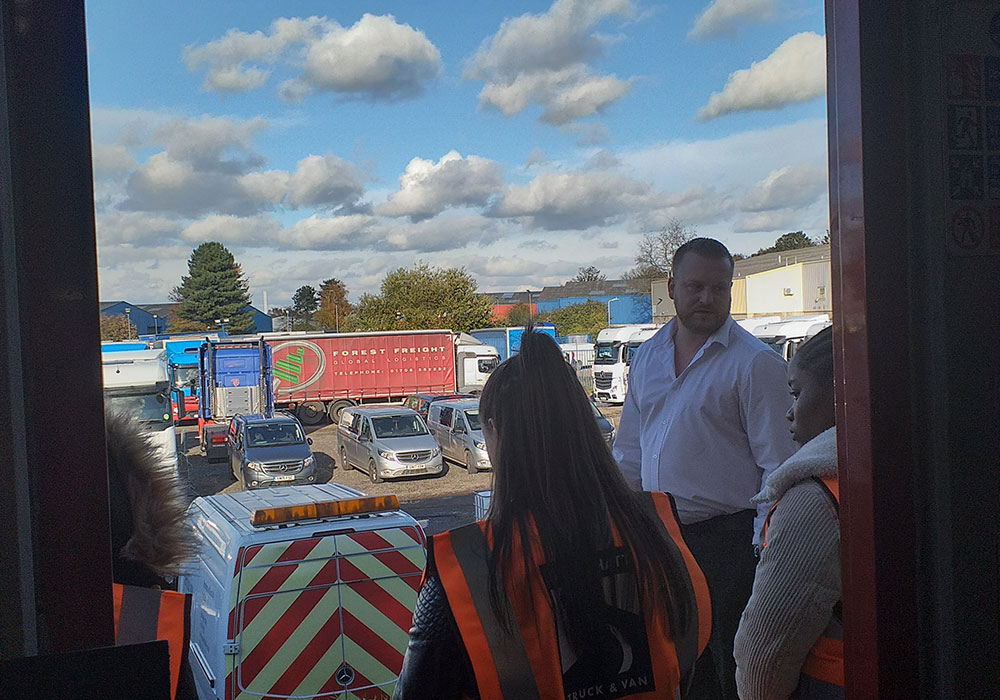 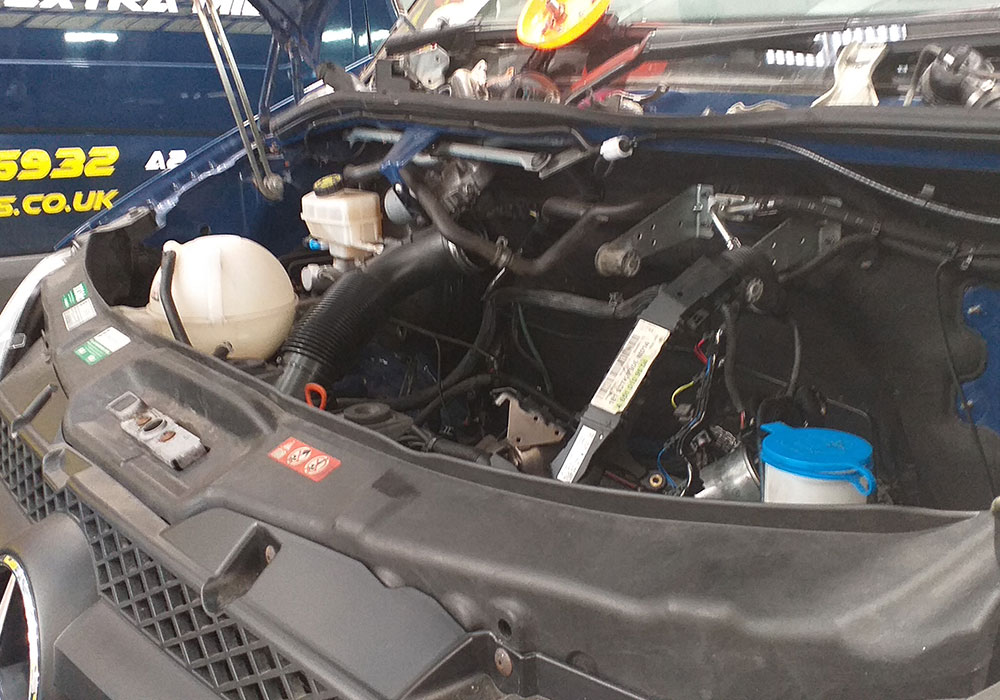